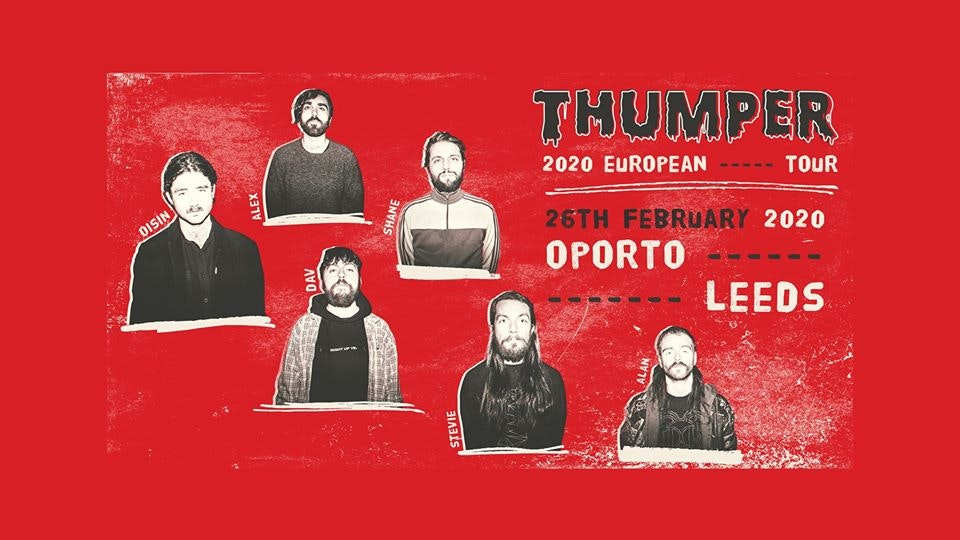 THUMPER are a noise-pop sextet from Dublin, fusing bubblegum psych with “a sonic thrust impossible to ignore”- Tony Clayton Lea, The Irish Times

2019 was kicked off with the three singles “(You’re Bringing Me) Down”, “In My Room” and “AFL”, all of which received extensive UK radio support from Steve Lemacq, Huw Stephens, Daniel P. Carter, Kerrang! Radio & Radio X, as well as several Spotify playlists including New Music Friday, and even a feature on E4’s Made in Chelsea.

In May THUMPER released their debut studio EP entitled “Out of Body Auto-Message” (produced by Daniel Fox of Girl Band) to a sold out show in Dublin’s Lost Lane, before embarking on a 3 month festival tour which included headline and high profile slots at Primavera (Barcelona), Knockanstockan, Body&Soul, Electric Picnic and many more.

The latter half of 2019 saw the band complete their first headline tour of the UK, inc sold-out shows in London and Bristol, before finally return to Dublin for their second homecoming sell-out of the year in The Grand Social.

With work already begun on their hotly anticipated debut LP, and a slot at Netherlands’ Eurosonic already planned for early 2020, THUMPER will land into their biggest UK tour yet with a swell of anticipation.

“In Dublin, it’s been thrilling to witness The Murder Capital, Fontaines DC, and THUMPER to see who can be the most viscerally thrilling both on stage and on vinyl”
Hot Press Magazine